President Trump has suddenly decreed that the alphabet will be reversed every year to ensure fairness for the long-deprived people with names such as Walinsky, Yurov and  Zengel.

Trump is determined to move ahead forcefully on his top priorities. He’s reacting to the concerns of millions of his backers who oppose “alphabet discrimination.”

“It is unfair to the Zymoskis and Ziglars of this great nation that they should always be last in line, always forced to sit in the back of the classroom,” said the president in a prepared statement. “This administration is committed to equal rights for all Americans.”

Detractors said Trump only took the action because the letter T is near the end of the alphabet. There have even been rumors that the president at first wanted the alphabet to start with T, though his top advisers talked him out of it.

The president derided this allegation as “false news” and said it was “sad that my critics can’t admit the fairness of the new rule.”

A presidential spokeswoman said Trump opponents “belly ache and moan and complain every chance they get.”

Supporters said the president took action because he truly does understand the plight of those who’ve long endured “this silent discrimination.”

Paula Aabder, a financial analyst with a midsize bank in Toledo, Ohio, expressed her strong opposition to the action, saying the government should leave the alphabet alone. “Itʼs been the same since ancient times,” she said. “It makes no sense to change it. My husband is proud of his name and says it never gave him any special advantages.”

Elton Zyzkraft, who works for an aircraft manufacturer based in the Seattle area, applauded the presidentʼs action. “Itʼs about time a politician showed the courage to take this long-awaited action. I have the utmost respect for the presidentʼs understanding of the plight of millions of citizens who have suffered all their lives just because of their name.”

Victoria Vanstone of non-profit advocacy group “V for Victory,” which has for years pushed an agenda of justice for those at the end of the alphabet, was in a triumphant mood. “Today is a red-letter day,” she said, “and we applaud the president.”

Even animals seemed to react to the decision. A warthog at the Smithsonianʼs National Zoo in Washington, D.C., appeared pleased, while attendants stayed strictly away from the glowering anteater. The zebras were ecstatic.

Further justification for the presidentʼs landmark announcement was provided by White House spokesman Jackie Z. Xyong. “President Trump has privately said that the alphabet has become boring, and felt it was in the nationʼs vital interests to move forward on steps to resolve this and create new excitement among the citizenry.”

The decision on annual reversals of the alphabet may be only the first step in the administrationʼs commitment to “add zest” to our language. Another proposal being studied by the recently established Department of Zest is to do away with capitalizing proper names.

“The president feels strongly that it is wrong to place people above things,” said Zest Secretary Dominick Wadham. “Why should it be capital R Ramirez but lower-case r radio? Who says Betty is better than bananas? I like bananas, and the only Betty Iʼve ever known was a snob.”

Among the fallout of the alphabet decision was that, according to an industry source who declined to be identified, the American Broadcasting Company was looking into a possible change in its initials to ZYX on odd-numbered years.

Meanwhile, Hilda Zymborg, who was about to marry Louis Abart, decided to postpone the wedding until the next even-numbered year. 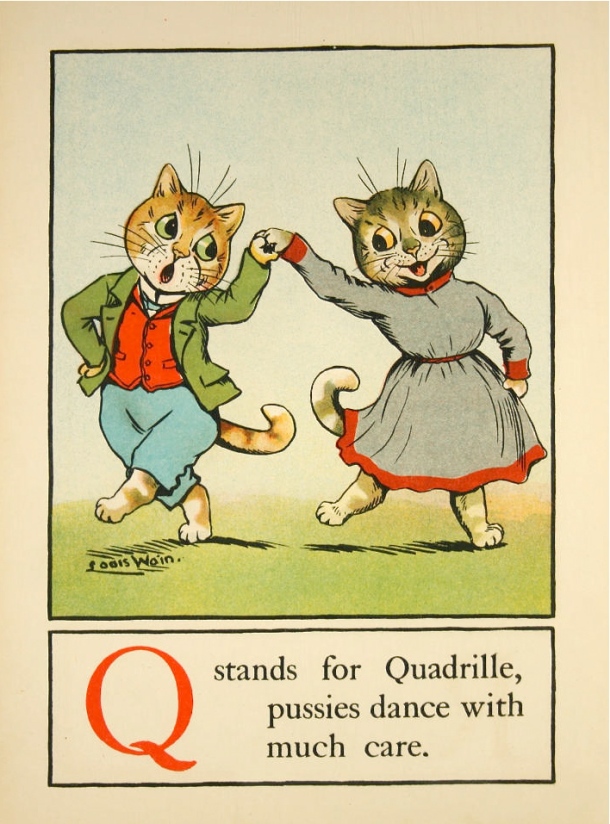 Q is among the letters least affected by the change, and, in fact, there have been no reported incidents of Q protests after the alphabet switch. Illustration from “A Cat Alphabet,” a picture book for little folk. By Dodge Publishing, circa 1910s. Illustrations by Louis Wain.